After graduating from Yale Law School, Hill worked as special counsel to Thomas, who was then head of the Office for Civil Rights in the U.S. Department of Education. She then became Thomas’ personal assistant when he became the chair of the U.S. Equal Employment Opportunity Commission (EEOC). According to Hill, during her time working with Thomas, he repeatedly asked her out and, when she refused, he discussed graphic sexual content in front of her. In 1983, after hospitalization for stress induced stomach pains, Hill resigned from her job at the EEOC and became a law professor. Hill explained that she continued to work with Thomas despite being subjected to repeated harassment because she was concerned about her job prospects and she feared professional retribution. 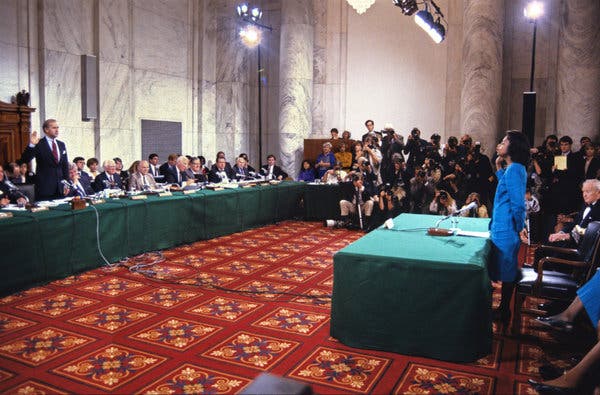 In the summer of 1991, President George H.W. Bush nominated Thomas to replaced Justice Thurgood Marshall, who was forced to retire for health reasons. The nomination was controversial from the beginning. Thomas had been a judge for only a year and a half, and his conservative legal views contrasted sharply with the man whose seat he would occupy. Even before Hill’s accusations came to light, Thomas’s nomination faced considerable opposition. On September 27, after the Senate Judiciary Committee divided on whether to send the nomination to the floor with a favorable recommendation, it forwarded the nomination without any committee recommendation.

HIll initially refused to tell her story when approached by Democratic staffers. She said she changed her mind after further considering her experiences with Thomas and the Supreme Court’s role in protecting workplace rights. Even then, Hill did not intend to go public with her accusations; she wanted the affidavit she submitted to the Judiciary Committee to remain confidential. Only when it was leaked to the press did Hill decide to discuss her story publicly.

On October 6, 1991, NPR aired Nina Totenberg’s interview with Hill in which she discussed her experiences with Thomas. As a result, the Senate Judiciary Committee reopened Thomas’ nomination hearings on October 11, and over 20 million Americans tuned in to the nationally televised hearings over the course of three days, at which both Hill and Thomas testified. Thomas denied any wrongdoing and denounced the hearings as a “high-tech lynching.”

The Senate  eventually confirmed Thomas 52-48, almost exclusively along partisan lines. Many credit Hill’s testimony and the all-male Judiciary Committee’s dismissive treatment of her with helping usher in the “Year of the Woman” in the 1992 elections. The elections produced a then-record 47 women in the House of Representatives along with an additional 4 Senate seats held by women. The hearings also raised awareness regarding the issue of sexual harassment. Congress amended the Civil Rights Act in November of 1991 to allow compensatory damages, rather than just back pay, for victims of discrimination, including those of sexual harassment. Sexual harassment complaints to the EEOC more than doubled in the five years following Hill’s testimony.

Anita Hill, today an author, professor, and advocate for women’s rights, has recently spoken out in support of Christine Blasey Ford, who has accused Supreme Court nominee Brett Kavanaugh of sexual assault when they were high school students..