On this day in 1862, Justice David Davis took his oath of office. 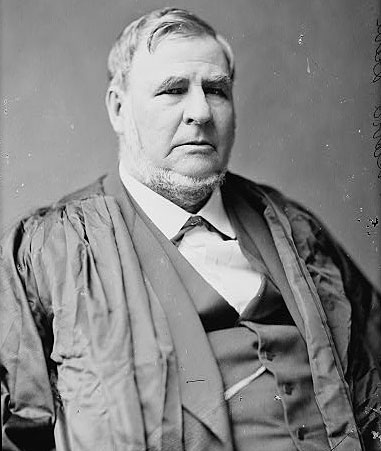 David Davis was born March 9, 1815, in Cecil County, Maryland. He moved to Illinois, where he became a state representative in 1845 and then a State Circuit Judge from 1848 to 1862. During this time he formed a friendship with Abraham Lincoln, who as a lawyer was a regular on Davis’ circuit. When Lincoln ran for the presidency in 1860, Davis was an active supporter.

Lincoln repaid his loyal friend by nominating him to replace Supreme Court Justice John A. Campbell on December 1, 1862. The Senate confirmed the nomination by voice vote on December 8, 1862, and two days, after taking his oath, he joined the Court.

Among Davis’ most famous opinions was Ex Parte Milligan. A military commission sentenced Lambden P. Milligan to death in Indiana during the Civil War for acts of disloyalty. Milligan’s lawyers sought a writ of habeas corpus, questioning the sentence’s constitutionality. In March 1863, Lincoln had signed into law the Habeas Corpus Suspension Act, which suspended the the writ of habeas corpus in cases of rebellion or invasion that threaten the public safety. In Milligan, the Court held that presidentially created military commissions’ trials of civilians are unconstitutional unless there is no civilian court available. The military commission therefore lacked jurisdiction to try or sentence Milligan, and he was entitled to discharge.

Davis’s tenure was also notable for his voting with the 5-member majority in the 1863 Prize cases. The majority held that the Lincoln administration was within its Article II rights to seize vessels bound for Confederate ports absent a declaration of war.

Davis served fourteen years on the Court. He resigned on March 4, 1877, when the Illinois State Legislature elected him to the United States Senate. He served one term in the Senate, retiring in 1883.