Like many of us, Justice Samuel Alito loves his coffee. In fact, he even has his own blend. In 2000, when he was a judge on the Third Circuit, his clerks decided to give him a surprise birthday present by getting a local coffee company, T.M. Ward Coffee, to come up with a special blend of coffee named after him: Judge Alito’s Bold Justice Blend Coffee. 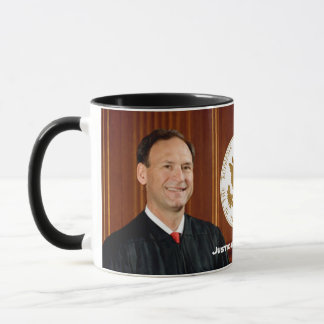 Then-Judge Alito used to regularly stop by the coffee shop, located in Newark, New Jersey, near his Third Circuit chambers, for a cup. He apparently also likes to give it as a gift; one Christmas he bought 44 pounds of beans his blend. The Alito blend is a mix of dark Papua New Guinea, Celebes Kalossi, Java, Italian roast and espresso beans. The company owner described it as “strong in the cup with some sweetness and a winey aftertaste.” One reporter found it ” strong and smooth, though packing a hidden punch that had an overcaffinated reporter wishing she’d shown some restraint.” For those who visit the coffee shop, just say “Give me an Alito” and you too can try a cup of the bold brew.