On this day in 1954, William Brennan gave a speech that cost him a unanimous vote in the Senate when he was later nominated to the U.S. Supreme Court. 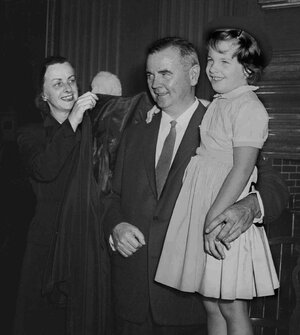 Brennan, then a judge on the New Jersey Supreme Court, spoke at the St. Patrick’s Day dinner of the Charitable Irish Society of Boston. He chose as his topic the anti-communist fervor that was then rampant in American society and politics. “We cannot and must not doubt our strength to conserve, without sacrifice of any, all of the guarantees of justice and fair play and simple human dignity which have made our land what it is,” he stated. He described “some practices of the contemporary scene” as “reminiscent of the Salem witch hunts,” and expressed the hope that they are “but passing aberrations even now undergoing systematic deflation.”

During a congressional recess in 1956, President Eisenhower announced he was going to appoint Brennan to the Supreme Court. Senator Joseph McCarthy, the man most associated with the anticommunist excesses that Brennan criticized, issued a statement declaring Brennan unfit for the Court. Although he was not on the Judiciary Committee, the Senator asked to sit with the committee for Brennan’s hearing.

Because it was a recess appointment, Brennan was appointed and began his tenure in 1956, before his nomination hearing. At his confirmation hearing, which took place on February 26, 1957, Senator McCarthy brought up Brennan’s St. Patricks Day speech. He asked the Brennan whether he approved of congressional investigations and exposure “of the Communist conspiracy set up.” Brennan replied that such investigations were a “vital function” of the Congress. Senator McCarthy then pressed him on whether he believed Communism was merely a party or a conspiracy against the U.S. government. Brennan declined to answer, stating that he should refrain because he was already serving on the Court and the Justices had pending cases involving Communists.

When the Senate confirmed Brennan by voice vote on March 19, 1957, there was a single dissenting vote: Senator Joseph McCarthy.